4 ways to get published in the New York Times

UPDATE 10/14 9:29 CST: These tips must work. After publishing his post on his own blog, Curt was asked to have it published in the 3rd largest newspaper in Norway! Your turn to start writing!

I’ve had the pleasure the past week to work with a mentor and friend, Curt Rice, and together we learned how to get published in the New York Times (or other major publications on or off-line). 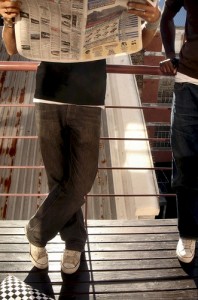 Curt is a thought-leader and an amazing theoretical linguist who made his way from Minnesota to Tromsø, Norway where he is now the second-in-command at the University of Tromsø with the title of Vice President of Research and Development. In addition to his busy schedule with the university, he also writes and speaks extensively on leadership in higher ed, gender balance and open access in research.

(1) The men who speak on behalf of the committee are ambivalent about the importance of making the award to women, and (2) the consequence of dividing the prize three ways in practice diminishes the value of each woman’s contribution.

Based on this thesis statement, he immediate wrote a 1000 word piece in response to the Peace Prize and wanted it shared as widely as possible. Within a few days, he was contacting major publications around the globe, both online and offline, and quickly learned a few tips that he should have followed to get published.

Curt spent the first couple days writing and perfecting his piece, but after speaking with the Guardian in London they told him: you’re already too late.

Time sensitive material has the best chance to get published, but it has to be published quickly. The Guardian recommended contacting them immediately with an idea for a story and a sketch of what it will look like. If you can convince the publisher you’re an expert and have a unique angle, you can solidify your chance at getting published first and write the piece immediately after.

A similar strategy is recommended for guest blogging. Contact a blog you would like to use for exposure, pitch an idea and if they bite, you can write the piece.

2. Be controversial and take a stand

Write what makes you excited and take a stand. News outlets want to generate views, and copywriting and headlines are key to attracting eyeballs. In a world dominated by social media, the 140 character headline drives traffic. In Curt’s case, there was concern about how it would affect his job and if it would offend colleagues…but taking a halfway stand won’t get published. Curt put the bold title “The Nobel Peace Prize’s problem with women” to attract attention and controversy and the first sentence draws the reader in saying:

This year’s Nobel Peace Prize award makes it clear that the current Peace Prize Committee has a serious problem with women. In fact, they have two.

The combination of powerful headline writing and an effective lead-in sentence will bring readers in and keep them reading.

Most of the major outlets are looking for pieces around the 800 word mark, so that’s a good number to shoot for. Additionally, guest blogs will appreciate having a post already formatted in HTML. You can write your post on a blog site like WordPress, which will give you the html version of your post (just click HTML instead of visual on WordPress). Insert all your links, photos and make sure you have a bio linking to your site and a way for readers to subscribe to your blog (Mailchimp is a great way to start a blog list). You can subscribe to my list to get an idea how it works!

Then, copy the HTML code and paste it to a site called Paste.ly. This will give you a short URL that you can share via email. The recipient can click the URL to copy and paste the HTML code to their site so all the links and images work as planned. Sharing the HTML code is great for you because it ensures your bio is exactly how you like it, with links pointing back to your site or newsletter subscribe list.

4. Keep your ear open for opportunities

While you are looking to publish, others are looking for sources for their stories. You can act as a source and generate links to your site or even have your content act as the story. The best way to find journalists looking for stories is through Help A Reporter Out or HARO.

On HARO you can sign up for emails three times a day with journalists looking for sources for stories in specific industries such as travel, science, media, entertainment, etc. If you quickly glance through the emails and respond if there is a story you can help out with, you can get published immediately and start generating traffic.

Ready for the next story

In Curt’s case, he was a little slow on the draw. Now however, Curt (and you) know what to do. Since he didn’t get published, Curt posted the story on his blog and promoted it through social media. If the story gets shared and read by the right people, it might be enough to get the story published later on. Most major publications require exclusive publication, so if you put it on your blog they won’t publish it, but online aggregators might pick your story up or contact you for input on the story.

There are enormous opportunities to have your content published through major outlets like the New York Times. As news outlets cut budgets, the opportunity to be given a story (already in HTML!) will make it more attractive for them to publish your content. For writers and bloggers, traditional media provides an opportunity to get in front of a new audience that is often very large. With links back to your site or email list, you can continue to grow your audience and convert those new readers into loyal subscribers.

Next time you have an idea, think: Is this “All the news that is fit to print.” Most likely it is…and can be.

Did you learn something from this post? If so, subscribe to our blog so you can keep learning!

Photo courtesy of: Jaded One