As summer quickly changes to winter, it is now officially Aurora Borealis season. The Northern Lights are an amazing occurrence that are often seen in Northern Norway.

Well, in my unscientific explanation, the sun throws electrically-charged particles at the Earth. These particles form a ring around the magnetic poles (yep, you can see the “Northern” lights in the south where they are called Aurora Australis). This ring is right at 70 degrees. At this latitude the particles collide in the stratosphere with oxygen and nitrogen, making a pretty white and green light (more green because there’s more nitrogen). The light dances around and is really quite fickle, it appears one minute and is gone the next.

There is much folklore surrounding the Northern Lights. One story goes that you have to bang pots and pans (and never wave a white sheet) because the lights are the path between the living and the deceased and if you don’t bang the pots the deceased will grab you and take you with them to the afterlife! Despite these threats, I have (to date) survived many a Northern Lights viewing sessions.

I was impressed to see that recently the southern part of Norway was also treated to the light show. According to SpaceWeather, the rare purple lights came out for a showing. Check out these amazing photos: 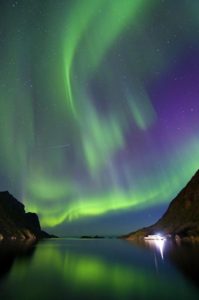 If you want to see the Northern Lights, Northern Norway is the place to go. They are a bit unpredictable, but if you monitor the solar activity and wait for a clear day you should be able to spot them! In fact, Tromsø is being lit up as we speak with “Wild Auroras!“